It's out of the garage and in the house!  This is a big deal.  I've only ever done one other big painting project, and this turned out well (although spray paint is pretty fool-proof) and it's my practice for an even bigger project that I might just have done before the new year.

So here's the before.  I know I posted a picture of it before, but then I realized it didn't look so bad, so I went back and took some pictures of how crappy this thing was before I took care of it.


I had originally planned to just do a light sanding and then priming and painting, but because of the paint chippiness, I ended up pretty much taking it all off.

An aside:  Here's why this project even happened.  For our first anniversary, my husband got me a piano (he's awesome).  Of course, cash was tight, so he was looking forever on Craigslist for a piano that worked and was in our budget.  He found one a week before our anniversary, but it was ugly.  He bought it anyway and then worked with a friend on it, stripping it down and re-staining it.  They got the whole piano done in week, but not the bench.  He was wiped out on refinishing furniture after that week, and so when he gave it to me, told me the bench was going to be my responsibility.  I was ok with that, and now after almost 4 years later and about 3.9 years after the leftover piano stain was lost, it's DONE!

Here it is now: 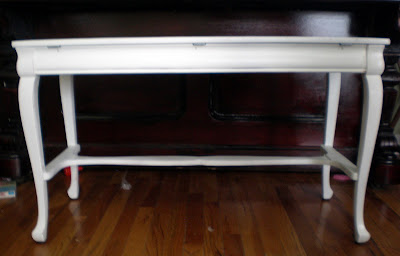 I did some light distressing that you can't even see in the photo, and might later go over it was a bit of stain or possibly stencil the top, but for now I have a real place to sit when I play.  It's great.

A detail I love: 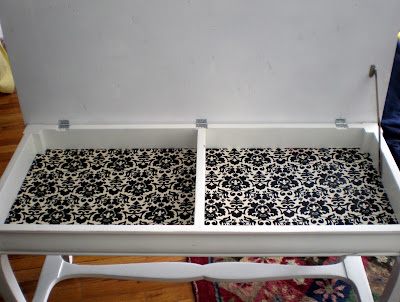 I mod-podged some fabric over the bench bottom before I nailed it back on.  I love it.  Bonus tip: When mod-podging over a large area, start in a corner and move out ward a little bit at a time, smoothing like crazy.  Worked like a charm.

I hope everyone had an excellent Thanksgiving and for those of you not in the States, I hope your Thursday was totally rad.
Posted by KasiaJ at 11:20 PM

Wow! SO much better! It looks great now! I love the fabric on the inside. Really pretty