A little late for a Halloween-type post, but whatever.

Two years ago I was watching Rachael Ray and she did a black bean soup with sour cream that looked awesome.  The thing that really caught my eye was how she did the sour cream- she had it in a squeezy bottle and did a swirl on top of the soup, then used a toothpick to pull from the center to the outside edge in a bunch of places, like the spokes on a wheel.  Then and there (two years ago) I decided that I wanted that to be my family's traditional Halloween meal.  I also decided right then that I would call it "Spiderweb Soup" and be the coolest mom in the world.

I finally made it this year, although I'm not certain the recipe I found here is the same as the one I saw on her show.  I seem to remember that one being darker than the one that resulted from this recipe.  I made it on Wednesday but next year I am DETERMINED (all caps-it must be true) to actually have it on Halloween.  I will also make the sour cream lines thicker, so you can the "web" better. 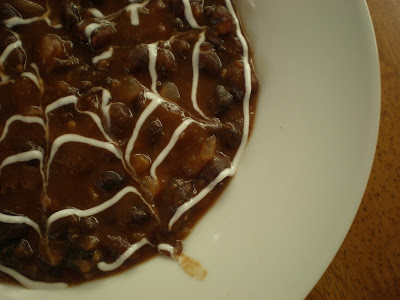 Email ThisBlogThis!Share to TwitterShare to FacebookShare to Pinterest
Labels: recipes

Love the sour cream spiderweb idea! Perfect for Halloween but my kids would love it anytime I'm sure.