This last week was full of sewing for me- I did the baby's costume as well as a few little things I was making by hand for our family pictures.  One of those things was some baby booties.  I had initially planned on crocheting some, but then abandoned that plan when I realized we only had a week until pictures and I still hadn't bought a pattern.  Luckily, I saw this pin on one of my sister-in-law's boards.  The pattern is from her other sister-in-law's Etsy shop.  I bought it almost immediately, because I can't crochet baby boots in a week, but I can definitely sew some in that same amount of time.

No tutorial, since the pattern isn't my original to share, but here's how they turned out: 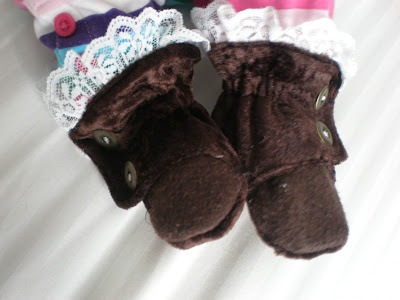 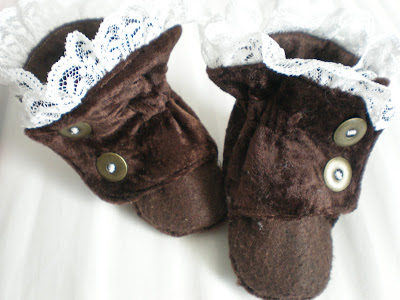 I used a brown faux velvet for the outside uppers and wool felt for the lining.  I love how they kind of look like spats.  You can see a bunch more fabric combinations here, at my sister-in-law's sister-in-law's blog.
My unsolicited opinion of the pattern:  It was great.  There was one pdf with just that pattern pieces and another with step by step instructions with lots of pictures.  I will definitely be making more of these for my little one.

Here's how many pictures I tried to take of them on my littlest's feet: 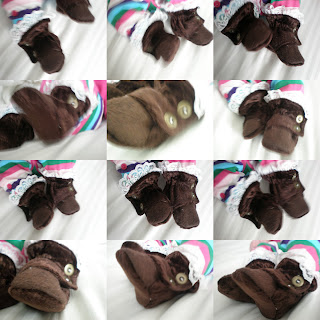 Two month olds are so wiggly.
Posted by KasiaJ at 10:58 AM

OH my goodness! These are to die for...so sweet:)

These are SOOOO cute! Wow! You did such a great job! :)

Christina at I Gotta Create! said...

Kara @ Mine for the Making said...

So so cute!! Love the lace :) I would love for you to link up to my diy fashion linky! It's called DIY Diva Thursdays and we party every TH-M :) Hope to see you!

Those little booties are so precious and the little feet that go in them too! I have a little sewing and fabric craft linky party I'm starting tomorrow and I was wondering if you could be so kind to stop by and post it? Thanks so much!
Sew Country Chick