I've been looking for a big trunk or chest for our living room (no luck so far) and checked out several consignment shops last Saturday.  At the Mona Lisa consignment in AF, there wasn't a trunk, but there were these little wood plaques that had old seed packets mod-podged onto them.  I loved it, so I made my own (the plaques, about 2"x4", were 12$ a piece).  Here's my version: 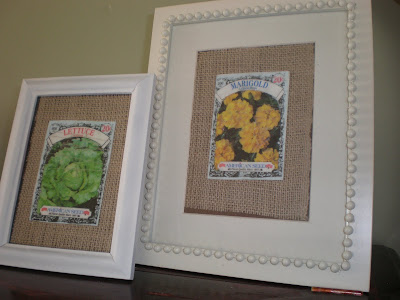 I had the frames lying around (the one on the right was actually another little project- I painted and added the beads, like this one, sans butterflies), and the burlap, and got the seed packets at walmart for 20 cents a piece.  I also tried to age the packets a little bit, but you can't tell in the picture.  I crumpled them up and folded them a bunch and rubbed them on the burlap to make the creases look old.  I also added some dirt.

My next framing idea was inspired by something I saw at Gardner Village forever ago, and then was reminded when I saw the skeleton keys at the consignment shop (for 4-5$ each- I remember being in high school and going to Star Mill before it was all prettied up and getting a whole jar of skeleton keys for that same price).  Anyway, since I didn't want to spend that much on them, I just googled "skeleton keys" and found this place and bought a bunch there for a lot less.  I actually already owned that first big jailer's set- I got it at Tai Pan awhile ago.  So, on my bookcase I now have this: 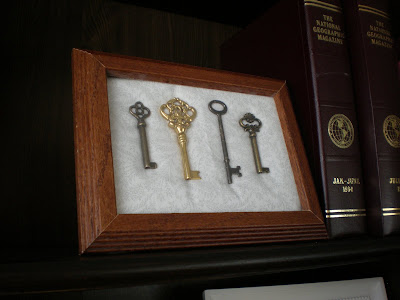 I might paint the frame, but I don't know.  Seems like all of my frames have been painted now, so I kind of wanted to leave one natural.