Pretty garbage can: because everything in Mim's room should be cute 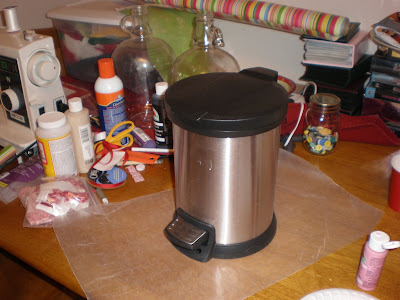 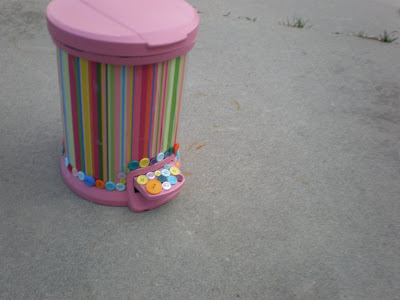 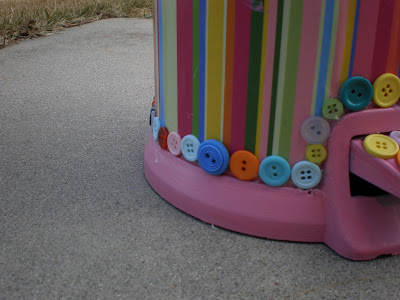 Nobody look too closely- I did this really fast and didn't fix several things that went wrong, because, hey, it's a garbage can.
How the garbage can problem arose:  In Mim's room, I was using a sort of medium sized, white, open top garbage.  I'm pretty sure it was just an extra that was around that I put in the baby's room.  When she was younger and going through about 10 wet diapers a day, I was great about emptying it daily.  As she's gotten older, it fills up less quickly, I get kind of lazy, and as a result, her room occasionally smells a bit like pee (poopy diapers are always taken immediately to the outside garbage; I'm not that gross).  So I plan that this new garbage will solve 2 problems- 1) it's only big enough to fit maybe 4 diapers in, thus I can't be as lazy, and 2) if I am lazy, it has a lid, which should help contain the pee smell until I can shake the laziness.
I used acrylic paint over the plastic and then mod-podged some wrapping paper I already had on the rest of it.  And then hotglued on some buttons to hide my crooked bottom border.  I kind of want to do something to the top, but no ideas yet.  If you have one, let me know.

I just found your cute blog. Thanks for the great project ideas. If you still need an idea for how to decorate the top of the can, here are three ideas: glue on a giant fabric flower; glue buttons in the outline of a flower/heart/starburst; Glue (or paint) a few stripes down the middle to coordinate with the wrapping paper.