The best breadsticks in the world. Seriously.

Hello, all.  I would like to introduce you to the best breadsticks EVER: 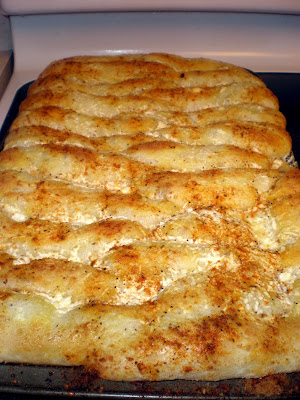 Their hobbies include being buttery and delicious, as well as being easy to make.

I've only ever posted one other recipe on this blog, so this is definitely something special.  Here's where it starts: 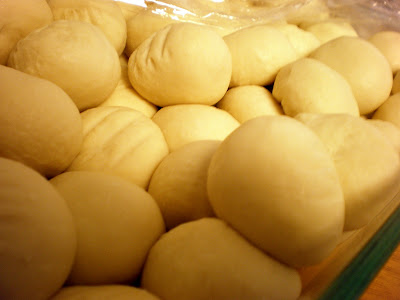 Defrosting Rhodes Rolls in the fridge the night before.  You need 22 per pan.  I made 3 pans yesterday, so I defrosted 66 of them- pretty much an entire big bag.
And now, here's where the delicious begins: 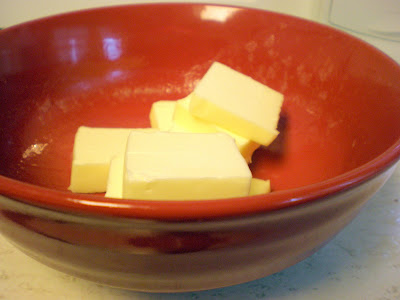 Melt an entire stick of butter, then pour it in a pan: 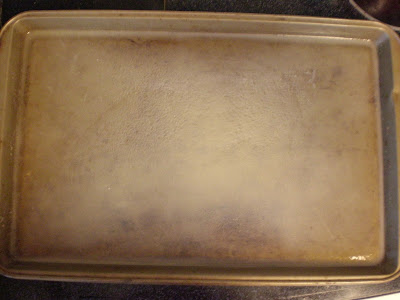 Then cover all that butter with parmesan cheese: 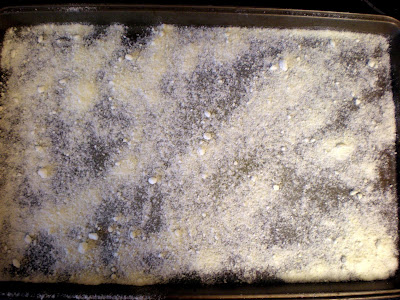 Mmmm-hmmm.  We're off to a great start.
Take your 22 balls of dough and roll them out and put them in the pan on top of all that butter and parmesan: 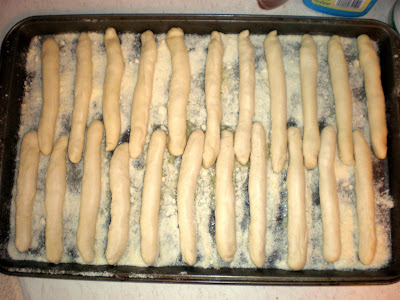 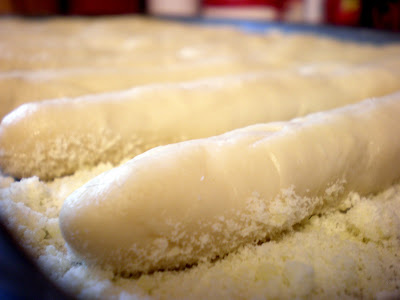 Then, let them raise until they look like this (or maybe slightly smaller- these ones raised a little too long): 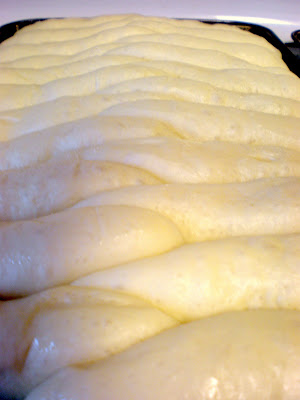 About this time you want to preheat the oven to 350 degrees.
And now it is time for the most delicious part.  I actually tried this 3 different ways on Sunday, but then never got to do my planned side by side taste because right after the last batch got out of the oven we had to get to my in-laws, and then not long after we got there Mim burned her fingers on the glass fireplace front (blisters on 4 of her fingers- it was so sad).  Anyway, I'll tell you all about my variations so you can have a taste test of your own.
The way my mom does it and how I usually do it starts out with squeezy butter.  Then you cover generously with more parmesan cheese (either the powdery stuff or fresh grated, it doesn't matter), feta, and just a sprinkle of Salad Supreme (sounds weird, but you should still do it).  Here's how it looks once that's all done: 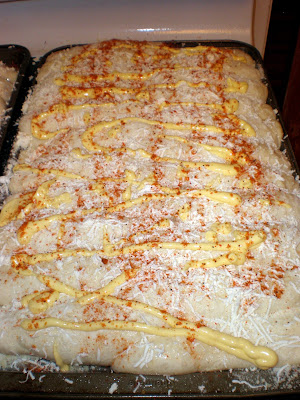 Like a delicious breadstick party.  I used to do a single line of squeezy butter down the middle of each roll, but I got lazy.
My method I made up the other day was the same, except instead of using squeezy butter, I melted real butter and put it in a spray bottle: 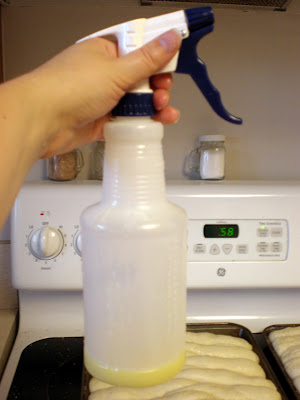 That's a whole stick of butter in there.  I found out you only need a half stick per pan.  Without the squeezy butter, the pan looks a little less festive: 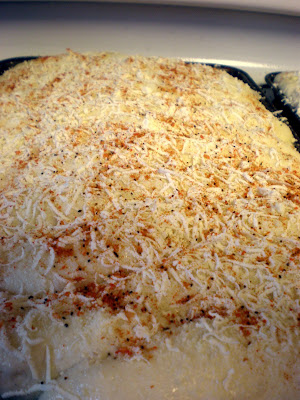 For the third variety, I used squeezy butter and real butter from the spray bottle (I know, I live on the wild side).  Maybe it was overkill, but I had already squeezy buttered two of the pans, and I didn't want to waste the rest of the butter I had already melted.
Bake them at 350 degrees on a middle rack for about 15 minutes.  They're still pretty soft at that point- if you like crustier breadsticks, you'd probably only need to add a couple minutes.
Take them out of the oven, let them cool down enough to pull apart, and have at it. 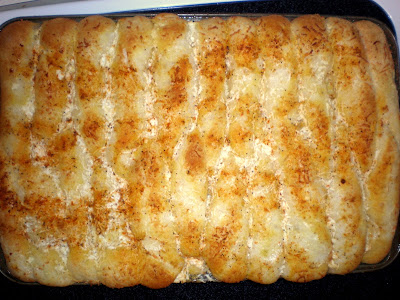 They really are the best ever.

***UPDATE 1/12/12***
A few weeks ago for a baby shower I used home made roll dough instead of Rhodes for these (the Lion House roll recipe, if you're curious), and I have to say, I don't think it made a real difference.  They were softer, but they still just tasted like butter and parm and feta (which is how it should be).  And the softness wasn't necessarily desirable for a breadstick.  From now on I'm just going to stick to Rhodes- so easy.

Email ThisBlogThis!Share to TwitterShare to FacebookShare to Pinterest
Labels: recipes

These look DELICIOUS! My daughter's birthday party will involve lasagne and breadsticks. I am so making these! Thank you for posting.

Oh my gosh! These look so good. I think I would eat half the pan in one sitting!

wow!...comfort food at its best!

I'm drooling on my keyboard. Yum! Following from Shabby Nest

I would love it if you'd come on over and link this up to Foodie Friday.

We love breadsticks at my house! I am definitely going to give this a try ;o)

Happy Friday! I love this!{2 kinds of butter - I'm in!} I featured you today on my blog toptwentthings.blogspot.com I would love for you to stop by and grab a button!

I made these tonight and they turned out amazing!!!!!!!!! Thanks for sharing!!!!!
-Tiffany

How much is one cube of butter? Like one stick/half a cup?

Heather-
I hope you check back. Yes, when I say one cube I mean one stick. It's why they're the best in the world. :)

these look great and I am going to try them but I was wondering what is salad supreme? also is it necessary to leave them overnight or can I leave them sit out today and then still be able to cook them tonight? wanted to eat these delicious looking sticks with our dinner tonight that is why I was wondering. Thanks so much:0)

these looks SO amazing! *drools*

OK, how much is a 'cube' of butter? Is that the whole flippin' pound?! They look amazing... can't wait to try them with garlic and parmesean, with a bit of fresh mozza for good measure! :)

you say Rhodes Rolls - but did you use regular or Texas?!? - Previous poster - a cube is a stick :)

I used regular, but I'm sure Texas would be just fine, too.

Erika @ My Road to Savings said...

Wow! These look amazing! I would probably eat a whole pan myself :) I am pinning this to make really soon. Can't wait to see how they taste :)

Hi Kasia! Thanks for your post featuring Rhodes rolls! Come see your post on our "You Made It" Pinterest board: http://pinterest.com/rhodesbread/you-made-it/. We'd like to invite you to call our Customer Satisfaction line at 1-800-876-7333 and request a free coupon. Thanks for baking with Rhodes!
-Your Rhodes Social Media Manager

What size pan did you use for 22 rolls

Another variety for a dessert is to start with melted butter on the pan and sprinkle brown sugar and cinnamon and sugar mix on the bottom of the pan, then lay out the breadsticks, put brown sugar cinnamon and sugar mix and melted butter generously on the top, and follow the baking directions... after baking drizzle a melted mix of powdersugar milk and butter to give it an icing, or use it to dip! YUMMY!~

Just found you on Pintrest and I definitely want to bake these delicious breadsticks but was is squishy butter? Thanks.

Just found you on Pintrest and I definitely want to bake these delicious breadsticks but was is squishy butter? Thanks.

I don't think I have seen Rhodes rolls, can I use something else?

Any frozen roll dough should work the same