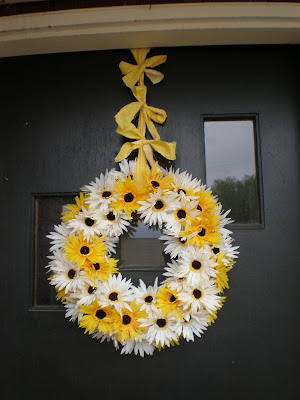 Doesn't my front door look friendly?
Check out the view as you approach: 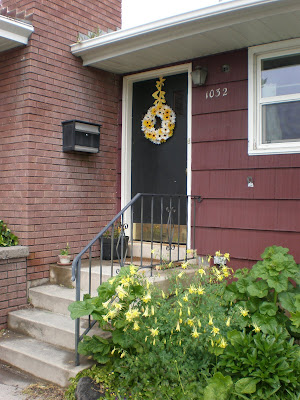 Look at that columbine bush.  Look at it.  Doesn't all that yellow make you feel even more cheerful?  The snow flattened it out, but I was able to perk it up some (I keep trying, too.  I feel like I'm a physical therapist for plants).  There are marigolds in the black planter, too.  Then, in a month or so, the hollyhocks behind it will bloom, as well as the daisy plant next to it.  Ahhhhh.
So, six bucks for the wreath.  Months ago I was at the Dollar Tree and they had bunches of gerbera daisies that I thought didn't look too bad.  I think I got 3 bunches.  A few days after that, I started making this wreath and realized I would not have enough.  So back to the Dollar Tree, where I got the last 3 bunches.  Whew.
To make it, all I did was take a straw wreath I had lying around (it seems like craft stores always run out of them, so I bought three last time I saw them), used needle nose pliers to trim the flower stems to 3 or 4 inches, and then just stuck them in the wreath form.  I didn't even use glue.
I did another thing pretty recently- 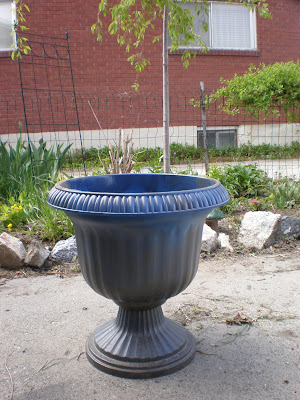 So, this is already after I painted it the first time.  I love the big ceramic planters.  Oh, I love them so much.  But they cost about a million dollars (or they might as well).  So this is a cheap plastic urn from Lowe's that was originally light gray.  My big idea was to try and paint it so I would look like a glazed ceramic.  I used two shades of blue and then a brownish metallic color, which is what the picture is above.  I didn't do too bad of a job, but I ended up not liking it as much as I thought I would.  Then, I remembered a few days ago that I had some leftover blue ocean breeze (you know, the color I would marry). 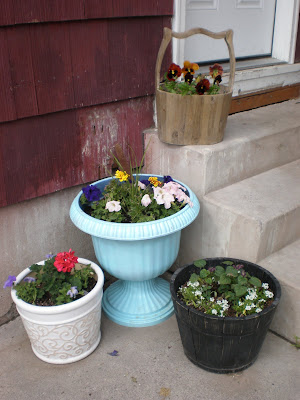 Boo to making it look real.  I love the robin's egg blue and red combo, so I love this next to the house.
Also, you can see why I wanted a big planter in this spot.  Mike tore out the wood staircase early this year (or maybe late last year) and the spots that were covered by it before are now exposed and ugly.  Since we're not repainting until the fall, hopefully the plants in that blue planter will grow and cover that yucky spot.  I'll cover the other yucky spot under the door with a board. 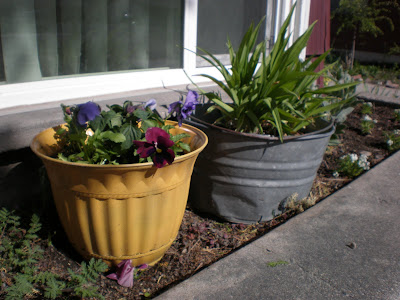 I am all about spray painting planters.  That yellow one used to be almost the same boring gray as the urn.  Speaking of which, I found a much better place for one of the shades of blue that participated in its faux ceramic look: 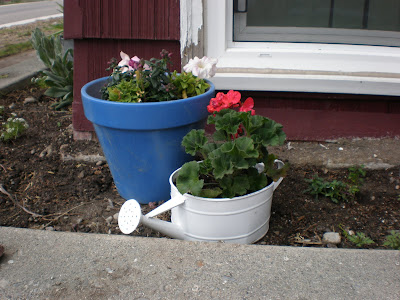 Kasia I didn't know you craft blogged! Me too! Your wreath is darling! I love it!
Tara Nelson
craftaffection.blogspot.com