Even though I only have one child, I feel like I'm an expert on bibs.  I've tried so many many kinds, and this is the one I use day to day: 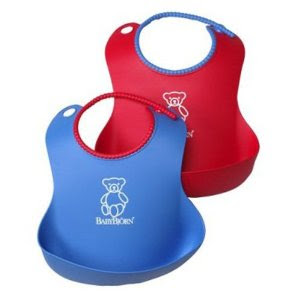 These are great.  However, there is a type of bib I like even better, but that I only just got around to making.  It's the kind my mom has at her house for the grandkids to use.  This kind:
It's just a dishtowel and some knit scraps.  But the coverage is wonderful.  And that's what I'm looking for, now that most of the food Mim drops is intentional, the pocket bibs are not as effective as they once were.
Anyway, it's super easy.  I got a dishtowel from the dollar store and cut a hole in it.  Then I cut a strip of knit the same length as the circumference of the neck hole. 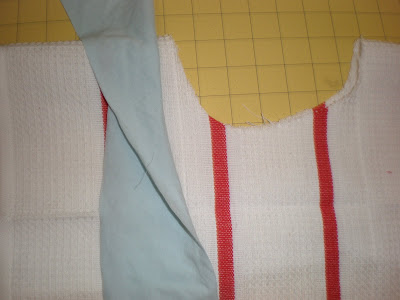 The strip of knit I used was 3.5 inches, so after it was folded in half and you take the seams into account, the finished width was 1.5 inches.
I added a simple applique at the bottom out of the same blue knit- a bird. 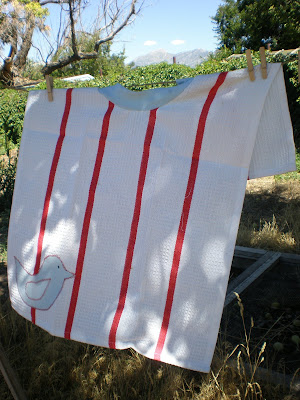 The eye of the bird isn't permanent- it'll wash out (and I'm glad, because it looks weird).
Here it is, in action: 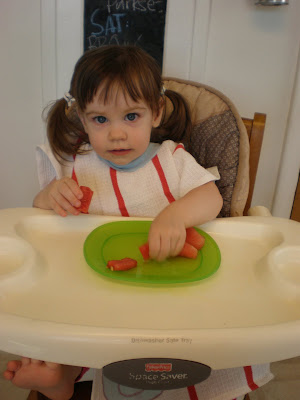 I'm liking it a lot.  I'm going to make a bunch more, since you can't just rinse these in the sink and reuse (which is great about the baby bjorn one).  There are, however, a lot of pros:

+Total coverage- I don't have to strip Mim down at all, because this covers everything.
+At 1$ and less than 10 minutes to make, it's not a major investment in any way.  I know they'll end up being stained beyond recovery, but it won't be a big deal.
+It comes up snug underneath her chin (no gaps for food to fall down and ruin clothes).
+Comfortable- sometimes the pocket of the stiff bib would prevent Mim from leainning forward like she wanted to.
+The length.  Any food that does get dropped unintentionally just rolls down the bib and onto the floor, leaving her clothes untouched.  I'm going to have to clean the floor anyway, so it's not a big deal.

One major drawback: not waterproof.  That's getting to be less and less an issue, though, with her hand eye coordination improving.  Hooray!

I think I'm going to switch over entirely.  Ah, to the dollar store!

Hi Kasia! Cute bib! I love those kinds too (the dish towel kinds)! I saw your Knotted Jute Vase post and LOVE IT! I was wondering if you would mind if I featured your post on Crazydomestic.com....I couldn't find an email for you. Let me know if that would be OK. Email me @ Crazydomestic@hotmail.com

Cute! What a great idea! I totally appreciate the coverage. :)Thank you for linking up to Style Feature Saturday! -shaunna :)

love these! I've been making these with old hand towels and tee shirt scraps! I'm pretty sure this is the best kind of bib because you wipe up even the biggest mess with all the towel attached! Love how this one turned out! Thanks for sharing your project!

Hi there! Visiting from The Girl Creative "new friend" Friday.......awesome giant bibs! :) I bet those are SO useful. I can see putting that on my 3 year old who still likes using his pants as a napkin. LOL

what a cute idea! I think even my 7 year old who can't eat without spilling might benefit from this! But he might actuallyl be crying in the photo unlike your daughter! Ha Ha! Visiting from Trendy Treehouse!