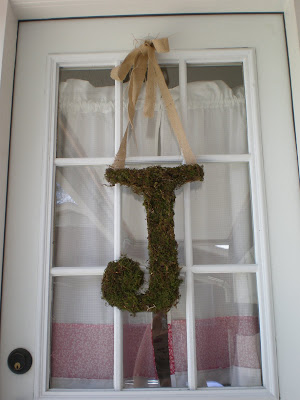 Mike got me a jigsaw for my birthday because he's awesome, so I put it to some use yesterday.  I used sheet moss over drywall.  I was going to use wood, but then remembered the drywall that I had gotten from Home Depot for free a few days before.  I needed about a 6"x6" piece for a patch in our living room, and when I asked if they sold it in pieces smaller than the sheets, the guy just gave me a piece a couple feet square that they were going to throw away.  So, the patch is done, and the rest of it was just the right size for this big letter J.  You know, for Johnson.  I already had the moss and the burlap for hanging, so it cost nothing.  I free-handed the letter- it's an imitation of the Elephant font in Word.  I think I'll embellish it a little more, add some little blossoms or something, but I love it plain, too.  Jigsaws are awesome. I added this little bit to the new bookcase after I did that letter.  I've had the moss forever, I think I just forgot about it.
And now-I'm so proud of this- the newly repainted kitchen!  True, I did paint just after we moved in, so it hadn't been 2 years since I first painted, but I hated the color.  I just wanted a tan, but the tan I chose, as it turns out, had very strong red undertones.  It looked pink.  I gave it a year to see if it would grow on me, but last fall I decided I would be repainting.  So I finally got to it last week.
Before: 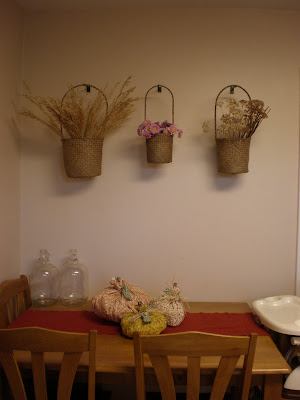 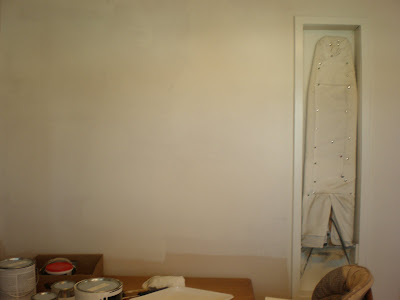 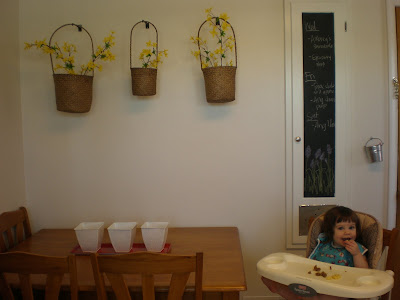 I took the before picture in natural light, since that's when it looked the least pink.  In the second picture you can see the contrast between the two paints and my awesome laundry board nook.  I've had the door off of that since we moved in- somehow it didn't get painted when it had the chance and it just ended up in the garage forever.  But it's finally back on- much better.  And I'd been dying to use chalkboard paint, so it worked out perfectly.  And I've put flowers in those little planters on the table now- red poppies.  The pail next to the laundry board cubby is to hold chalk and an eraser.
I've started my first quilt.  Pictures to come.