DO YOU WANT TO SEE MY NEW COLLAGE WALL?! 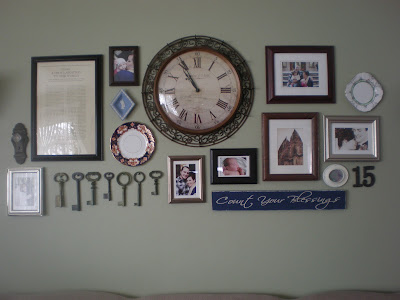 This has been in the works for awhile. Mostly because of laziness, since I had almost everything that went up there. It was actually mostly blank for a few months, when the clock fell down for some reason and knocked down the majority of the stuff that was there. (It was kind of scary, I was on the couch nursing the baby at the time and the clock actually hit me.) So for several months, this is how it was:
Kind of sad that I left it that way for so long.

Before that, it was like this (minus the banner, that was up for Mim's first birthday almost 2 (!!) years ago. 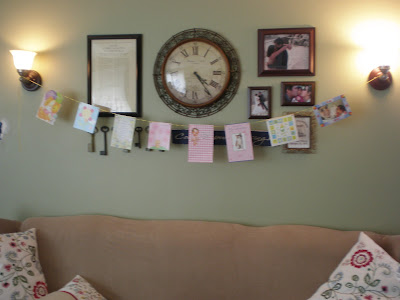 And again, its current state (as of this morning): 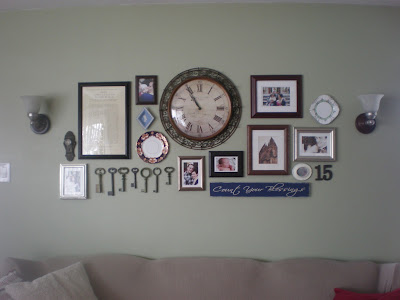 It's not a huge difference, I know, but I like it so much more. About the stuff: the plates are ones my mother-in-law gave to me. The blue diamond one and the white one belonged to her grandmother and the dark blue rimmed one was part of my father-in-laws mother's china collection. I think. The keys are from Pottery Barn, the number 15 is from Hobby Lobby, as is the doorknob key plate thing. The frames and clocks have all been around for a long time.

I'll probably still do some tweaking, but here's the other thing I'm loving about this wall- I'll be able to!!
Our house was built in 1950 and has plaster walls. For those of you that don't know that pain- lemme tell ya. Hanging things is terrible. The walls are really hard and nailing things in doesn't work very well. Push pins don't work at all. The best way to hang things is to drill a hole, hammer/push in a plastic anchor, then use a screw in that to hang things on. See? Not something you want to do for every little picture.

I had a brain wave a few weeks ago. Command hooks! I had a few but needed more so I sent Mike to the store for some more. He came back with these: 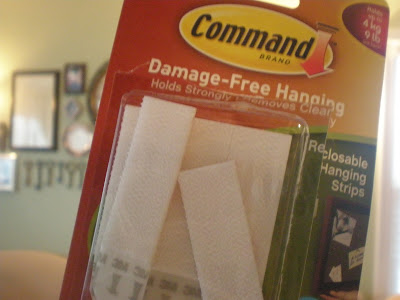 AMAZING!! It's sort of like velcro. You stick one to the wall and one to your frame and then stick the frame to the wall. It's brilliant, way better than the hooks. I can't believe I've lived for 3.5 years in a house with plaster walls and have only just discovered these. I can move things around on my walls again. (Well, I could before, but it involved puttying and repainting all the plaster that would chip off when removing nails.)

I love discovering awesome things like this. Another of my new favorite finds:

They're really good. And Costco has a coupon on them that goes until Friday, I think.

And by the way, I'm not being paid to endorse anything here. I was just thinking about awesome stuff and these came to mind. Because they're awesome.

I really like the collage. I want to do one in my house and then I just get frustrated trying to find things. Thanks for sharing.