First off, let me apologize for the general photo crappiness that's coming your way- these were taken at night, with a flash.  I hate the flash so much.
So, I thought of something to do with one of my fat quarters that I bought for no reason!
I remembered these owls from Pottery Barn Kids:
They were cuter in my memory.  I don't really like that green one at all- I think it looks kind of freaky.  So I poked around some more and saw some really cute ones online:
So, I combined some elements and came up with my own: 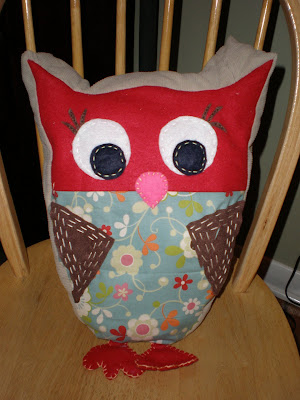 I used a fat quarter, some felt scraps, a pair of my husband's old pants, and some embroidery floss.

I hand sewed all the bits to the bird's front using a whip stitch and a running stitch and one other stitch I don't know the name of, and then a blanket stitch around the feet.  I cut strips from my husband's pants (they had an un-mendable rip) and sewed them together until I had enough to go around the circumference of the bird.  Then it was mostly just about pinning like crazy.  And sewing.  and stuffing.  And then hand sewing the hole closed.  And then...

I hope Mim likes her.

She's so cute! This would make a great home ec project for my kiddos this year! (homeschool) Thanks for showing us. Adorable!

very cute! I've been looking around for owl ideas so I can make an autumn welcome sign. this was inspiring!

So cute! Owls are really in right now! Love the cute eyes.

Love it! Thanks for sharing!

What a super cute owl! Thank you for sharing. Can't wait to try this with my scrap fabric. The owls are soo cute right now!

I love your owl! He is adorable!!

Just wanted to to let you know that I featured your owl today! Loved it! Check it out here:

Feel free to snag my I was Featured button for your blog and I hope you'll come over and visit SuperStinkyBoys and link up to Mad Skills Monday!

Oh I love it!! I have seen all of the ones that you have shown, and I've been dying to make one myself. Yours sure is fabulous! Great job!

Very cute! I have a pattern drawn and will be making one for my daughter's baby room soon. Yours is great! Jackie

So so very cute! I love it!

That is adorable! I'm visiting from HOH. Such cute detail in this little hoot owl!

Stephanie Lynn @Under the Table and Dreaming said...

Kasia, The owl is adorable! I love the patchwork look! Fantastic job! I have featured this today - stop by and grab a featured button if you like. Hope you are enjoying your weekend! Thanks for linking to The Sunday Showcase. ~ Stephanie Lynn

So cute! Congrats on the feature! :)